Inside the Gaza ‘meat grinder’

Dr Ghassan Abu Sitta:  “All the areas around the hospital were being bombed all the time. We then got a call to the emergency room and we were told that the administration and the out patients building had been hit – a lot of families had taken refuge in that area – so we had to go and help.” 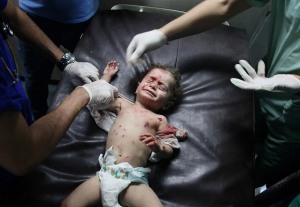 During each of Israel’s three major assaults on Gaza, Dr Ghassan Abu Sitta has volunteered as a surgeon at the al-Shifa Hospital in Gaza City.  A Palestinian reconstructive surgeon, he lives in Lebanon.

This interview with him was conducted by journalist Yazan al-Saadi, and published in the English edition of Al-Akhbar, a Lebanese newspaper.